Peete was born in Detroit, Michigan. He played on the 1983 and 1985 U.S. Ryder Cup teams. He won the Vardon Trophy for lowest scoring average in 1984. He was in the top 10 of the Official World Golf Ranking for several weeks when they debuted in 1986.

Peete did not begin playing golf until he was in his 20s, but immediately excelled at a game most pros learn as young children. He learned the game while peddling goods to migrant workers in Rochester, New York,  playing on the public course at Genesee Valley Park. Growing up poor, Peete suffered a badly broken arm that was never properly set. He was the leader in driving accuracy on the PGA Tour for 10 straight years, 1981–90. Peete was inducted into the African American Ethnic Sports Hall of Fame in 2002. 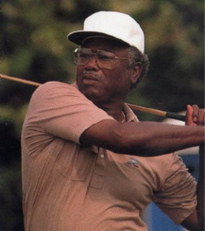 Charlie Owens was a pioneer for many reasons, one obvious reason was the color of his skin, which precluded him from playing Professional Golf during the 50's and 60's. But there were other reasons why we grant Charlie pioneer status.

Charlie sustained a leg injury while parachuting out of a plane when he was in the Army. Thus he wound up with one leg longer than the other. As a result of his injury the PGA tour allowed him to use a cart. Charlie (Not Casey Martin) was also the first to challenge the USGA on it's policy of walking only.

During his career Charlie developed a severe case of the "Yips"and as result could not putt. Instead of giving up the game, Charlie put his imagination to work and invented both the Belly Putter and the Long Putter.
Website by: www.danapspeaks.net